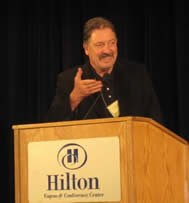 According to the Oregon Wine Board, the Lifetime Achievement Award is “given to a person or couple whose work was pioneering and spans not only a personal lifetime, but the lifetime of the Oregon Wine Industry.” Wright was recognized for his work pioneering vineyards from 1978 to the present in the Columbia Gorge and Columbia Valley AVAs.

According to Oregon Wine Board member Leigh Bartholomew, co-owner of Dominio IV and general manager of Archery Summit, Wright received multiple nominations and letters on his behalf to receive this award. It was voted upon unanimously by the board to award Wright the Lifetime Achievement. Bartholomew also mentioned that only 6 others have received this award, including pioneers Dick Ponzi and Bill and Susan Sokel Blosser. It is truly an honor to be held in such esteemed company.

We’re thrilled that Lonnie was recognized for his decades of digging in the dirt to plant some of the best vineyards you can find! Next time you see him, let him know how proud of him you are, I know I will.